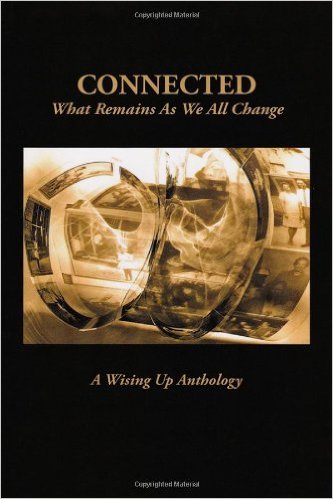 Wising Up Press published an anthology entitled “Connected: What Remains as We All Change”. The editors were Heather Tosteson and Charles Brockett. My poem “Orbs” was included.

I was delighted to meet several of the authors from the Connected anthology at a public literary reading on Cape Cod in 2013.

When we were girls sharing a bunk at camp,

a single sleeping bag between us,

we giggled over our emerging breasts.

Now, reunited, by chance, in another city,

and think nothing of comparing nursing bras.

We each dote on our gurgling newborns.

“They’re gifts from God, like air or water,” Yolanda says,

I nod my head in agreement.

Athough I don’t share her Catholic faith, I believe in sacredness and wonder.

“They’re miracles,” she repeats, “Like the sun and the moon.”

I think about the cosmic reflections in my daughter’s eyes.

Who would not marvel at fullness and mystery,

the sweet perfection of a baby’s bottom,

the thin crescent of an infant smile,

the lunar landscape of a fontanel?

But then the conversation darkens.

I cringe as Yolanda dips words in red,

“It’s never anything but murder,” she maintains,

I find myself stiffening, then shouting.

I talk about the gravity of choice,

the tidal force of timing, women I once knew eclipsed with fear.

We sit there snarling, both of us steeped in our convictions,

We go for months without speaking,

each of us left holding a long broken thread.

How do you make a shared blanket out of nubby differences?

And, then, one day, Yolanda’s on my doorstep with daffodils.

We push the strollers to the park, loneliness melting like March snow,

each of us offering ways to mend.

Don’t we both love life? Life itself,

with its sweet milky breath? Have could we accuse each other of less?

At the far side of the park,

we latch our little ones to baby swings,

and let them rock, back and forth, in steady rhythm.

We watch their faces, round, celestial,

all that is precious

hanging for a brief moment in the air,

then returning to our outstretched hands.

Gabriella Brand is a writer, adventurer, and educational consultant. She can't stop teaching and learning foreign languages. She would like to walk on all the continents (three more to go!). Her husband is extremely patient and her children are, fortunately, all grown up. View all posts by Gabriella Brand